Last night in the 798 Art district of Beijing, a famous french Papparazzi, Jean Pigozzi was celebrated at UCCA in a big retrospective of his work.

The black and white images of his famous friends were set against a very red backdrop reminding us of his professional life spent on the red carpet.  Some were papparazzi shots, others were more his private images and personal recollection of his jet-set times and parties with the rich and famous. These were old school cool and bear witness of times vanished with access pass and ‘real’ cameras in starch contrast with the hundreds of shots taken last night with iPhones and other digital toys (present company included).

A FASHION HISTORY moment recorded: When Calvin Klein met Kate Moss. In 1994,he signed her as the face of CK One and made the 90’s Supermodels obsolete under one minute. Kate became an instant Fashion Icon.

Jerry Hall playing with Mad Cash in Paris. (notice the original Chanel clipped under her arms…)

We all did this last night, but i was there first…

Chen Man…Beautiful and talented. I did not know her last night,  Wish I had, I would have told her how much I admire her work… (www.chenmaner.com)

Except for the lovely Angelica Cheung, everyone last night seemed to have received a subliminal order from a mysterious fairy that whispered in their ears… ‘It’s all about RED »…

Everywhere I looked everyone seemed to be sporting something red: lipstick, coat, shoes, dress…

Chinese actor Tong Dawei snapping away at the walls. 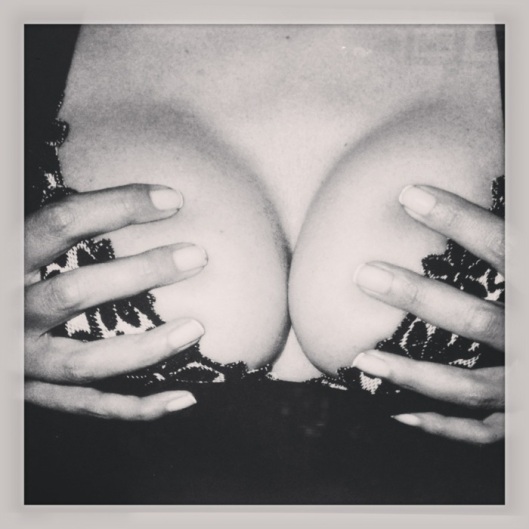 Fabulous pair of United Nude on the red carpet.

The owner of the United Nude. Perfection.

Multiple faces of Mick and Keith by Jean Pigozzi

Mick snapped by a CRS in France. (cool shot)

Or maybe it was just the carpet.

PS I am NOT DONE with PFW but wanted to publish this night quickly. Will continue about Paris very soon…