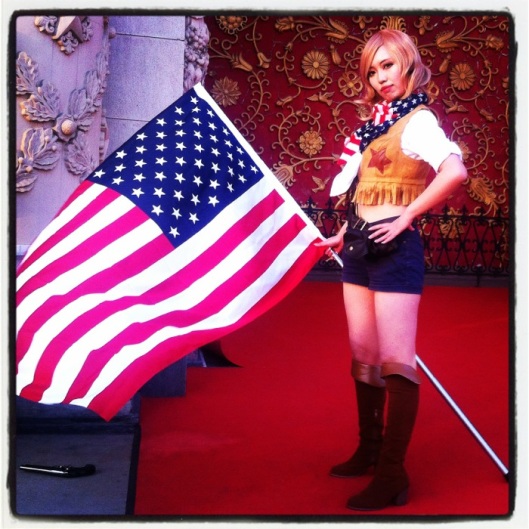 COSPLAY: Cosplay (コスプレ kosupure?), is a portmanteau of costume play, is a performance art in which participants called cosplayers wear costumes and fashion accessories to represent a specific character or idea that is usually identified with a unique name. Cosplayers often interact to create a subculture centered on role play. A broader use of the term « cosplay » applies to any costumed role-play in venues apart from the stage, regardless of the cultural context. (source Wikipedia) 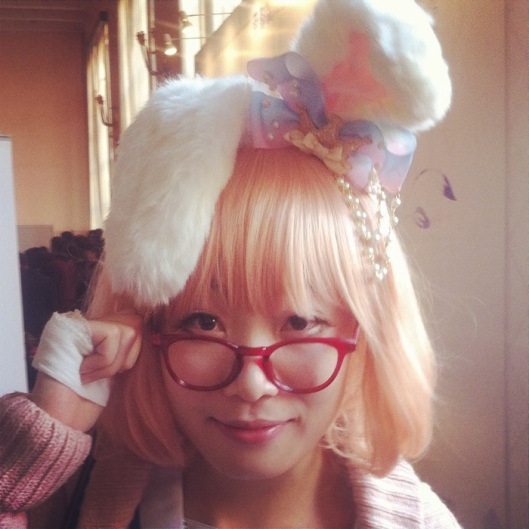 « Regarless of the cultural context »… Well, the cultural context in China is not one where multiple tribes costumed according to their favorite manga characters and cartoon fantasy usually play a vast role.  So, it was serendipitous yesterday that I would stumble onto a Cosplay convention at the Beijing historical Exhibition Center. 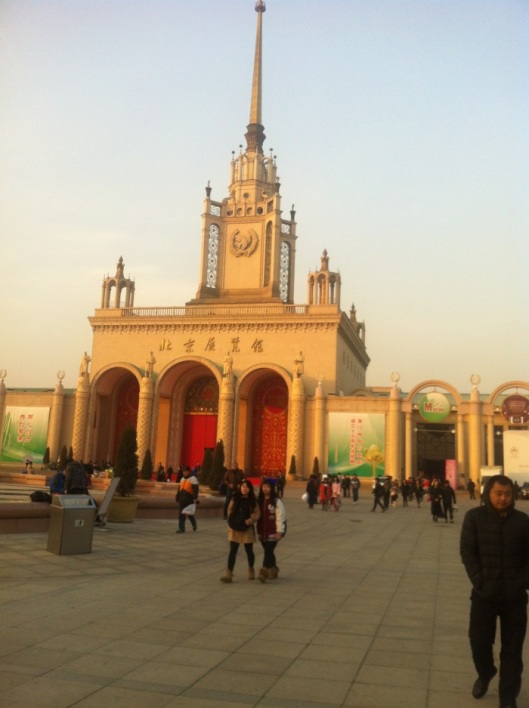 Beijing Exhibition Center built in 1954 was yesterday a theater where witches and warlords, pirates and blue haired princesses gently battled it out.

The alternative scene in Beijing is really underground. There is an emerging punk musical scene, some bars in the hutongs are presenting live alternative music, more and more full-on tattoos which are still quite taboo here, but precious little else gives any different colors to the streets. The LGBT community is still rather discreet. Chinese people are traditional at heart and do not like to stand out too too much.

From Los Angeles to Perth, Lausanne to London, Honolulu, New York or Barcelona… Every week, everywhere in the world there is a COSPLAY event going on. Cosplayers mingle and compete dressed in their elaborate outfits, often homemade with all the bells and whistles, full-on makeup representing their favorite fantasy characters. Sexy nurses, naughtly schoolgirls, zombies, pirates, blue-haired moon princesses straight out of traditional fairy tales, fearsome chinese warriors, lacy bo-peeps, sweet bunnies or pink-eared kitty cats, anything goes with a level of detailing that is often mind bloggling.

From the hundreds of cosplay conventions going on each year all over the world, precious few ever happen in China. The Cosplay scene is very big all over Asia and it is growing fast in China but it is still very underground. In fact, on cosplay.com the chinese entry shows a total of zero events for 2013 and 2014… Evidently there are some though and yesterday hundreds of cosplayers showed up in Beijing.

It was a very good surprise to find such a large group of young chinese rebels, dressed to the nines with wigs, clothes, contact lenses, swords, guns, hats, in full-on characters, smiling and playing in the coolest outfits. Very kindly they all took and held the pose for the cameras. 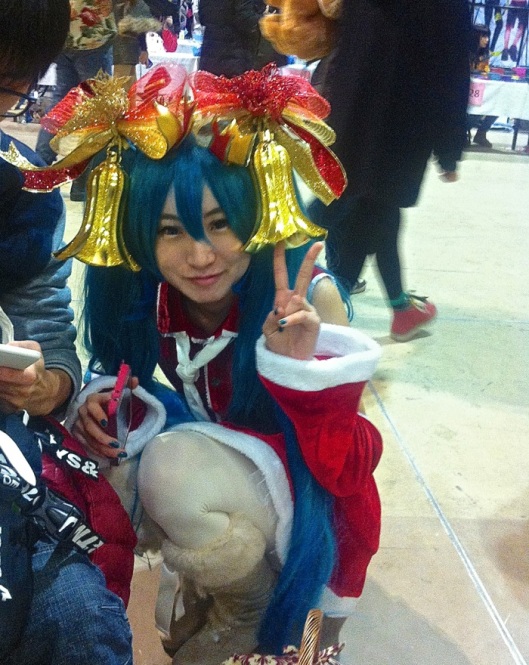 I loved the Christmas tree hair and the Ms Santa suit!

I would have loved to see the faces of the people in the subway when this motley crew headed home.

Researching a bit, I found out, unsurprisingly that the big motivation of the Cosplay scene in China is first the love of costume, of course, but secondly the players hope to become famous (or notorious) with it. With fame: money.

A strange crusader/nun/nurse with silver rosaries and a sword and lipstick. As you do.

Boys are a very strong part of the Cosplay community. In fact, I think they made at least 40% of the players I saw. 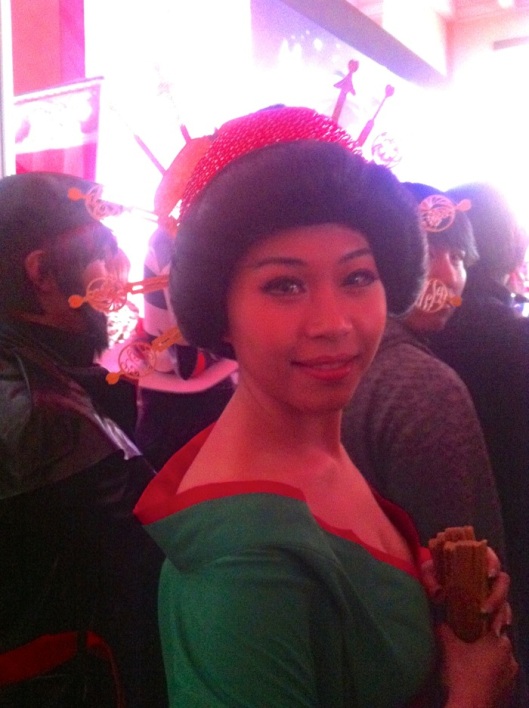 Thank you to all for posing so kindly. 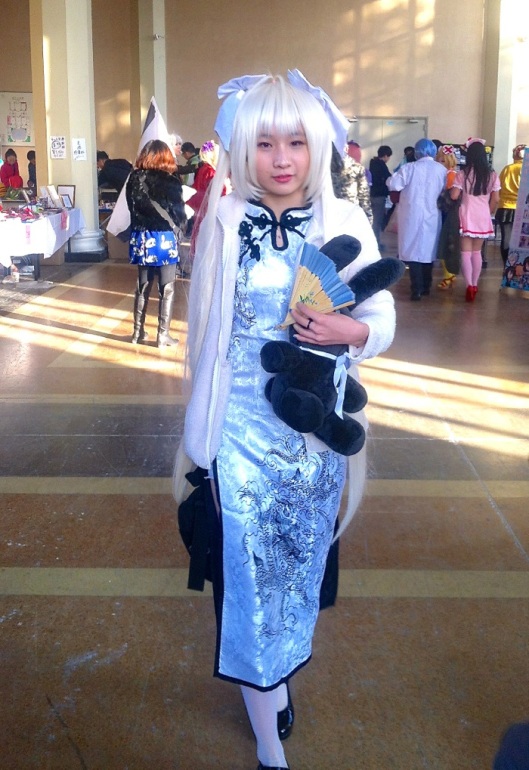 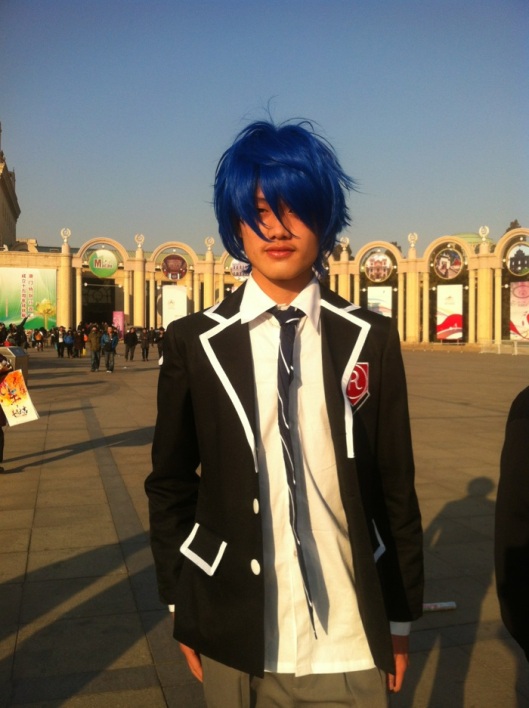